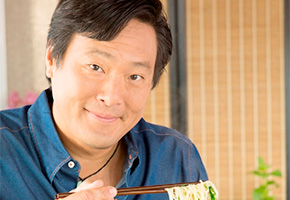 The Boston area’s Ming Tsai is one of the distinguished, high-profile, celebrity chefs preparing Ultimo Weekend’s Grand Banquet at the Venetian. You know Chef Ming from Food TV including his long-running acclaimed series for Public Television, “Simply Ming.” His popular restaurants in the greater Boston area are the long-running Blue Ginger and the more recent, Blue Dragon. We’ll meet him.

“Ming’s love of cooking was forged in his early years. Ming was raised in Dayton, Ohio, where he spent hours cooking alongside his mother and father at Mandarin Kitchen, the family-owned restaurant. His experience also taught him about restaurant operations and the art of making customers happy.”

“Ming headed east to attend school at Phillips Academy Andover. From there, Ming continued to Yale University, earning his degree in Mechanical Engineering. During this time, Ming spent his summers attending Le Cordon Bleu cooking school and apprenticing at area restaurants in Paris. After graduating from Yale, Ming moved to Paris and trained under renowned Pastry Chef Pierre Herme and then on to Osaka with Sushi Master Kobayashi.”

Upon his return to the United States, Ming enrolled in graduate school at Cornell University, earning a Master’s degree in Hotel Administration and Hospitality Marketing.

Chef Ming supports a number of worthy non-profits but is particularly passionate about serving as President of The National Advisory Board of Family Reach. Its poignant mission is to provide crucial financial relief and support to families fighting cancer. The financial consequences can be overwhelming.