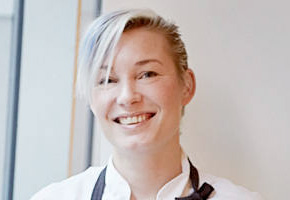 Aquavit, a landmark New York-based fine dining establishment featuring the cuisine of Sweden is a classic. In the Spring of 2014 their former Pastry Chef, Emma Bengtsson, was unusually elevated to the Executive Chef post there by proprietor Hakan Swahn.

Former Aquavit Executive Chef Marcus Jernmark recruited Bengtsson in 2010 to join the restaurant as Pastry Chef. Bengtsson quickly became known for her creative interpretations of classic Scandinavian desserts, as well as establishing a new bread program. Her style was reflective of the region’s penchant for local products, progressive techniques, and continuing traditions; and it was well received, as Aquavit was recognized with one star in the Michelin Guide New York City in 2013 and 2014.

Håkan Swahn, the owner of Aquavit, saw talent and fresh perspective in Chef Bengtsson’s skillset and offered her the role of Executive Chef in spring 2014. She accepted the job, and since then has injected the critically acclaimed menu with her personal style and experience.

In October of 2015, her work garnered a second Michelin Star for Aquavit, making her the second female chef in the U.S. to run a two-star kitchen and the first ever Swedish female chef to do so.