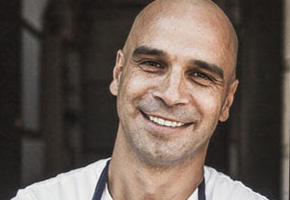 Considered by many as the pioneer of modern Moroccan cuisine in the United States, the James Beard award-nominated Mourad Lahlou (San Francisco’s Aziza and Mourad) never envisioned becoming a world-famous chef. Chef Mourad is one of the celebrity chefs preparing a course for The Grand Banquet of Ultimo Weekend at The Venetian. He’ll lift the lid on the tagine for us.

Aziza is currently under renovation. The plan is for it to reopen in February.

The Marrakesh native immigrated to the United States when he was 20 years old to pursue a master’s degree in economics. Missing his country’s cuisine, Lahlou taught himself how to recreate versions of his favorite Moroccan dishes with local ingredients using his own inventive techniques. Most of the lessons he learned about food came from his mother, who cooked traditional Moroccan recipes, and grandfather, who took him to the markets.

Chef Mourad’s strikingly modern reinventions of traditional Moroccan dishes are all about showcasing the great flavors of his native cuisine in ways that harmonize with the fresh, local, artisanal ingredients available in Northern California. “I’m not sure I would even call it a Moroccan restaurant anymore,” he says. Like his jet-black tattoos, Lahlou’s food and restaurants reveal a very personal story, one rooted both in San Francisco and abroad, and recount the memories that have inspired his life’s work.