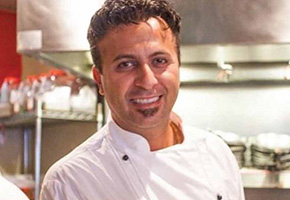 Chef Dino Ferraro is affectionately known to his many regulars as the “Godfather of Italian Cuisine” in Huntington Beach with three popular Italian/Mediterranean Restaurants located in this prominent beach community. Chef Dino’s flagship is Capone’s Cucina and his other establishments are Black Trumpet Bistro and Mona Lisa Cucina.

Capone’s Pasta and Pizza opened in Westminster in 1997. It was at this location that Dino expanded his repertoire and added specials to the standard menu. Customers were hooked on Dino’s ability to transform everyday ingredients into culinary works of art and became regulars.

He sold Capone’s Pasta and Pizza in 2000 and moved to Huntington Beach where he opened Capone’s Cucina with a goal of creating a more gourmet dining experience. In 2002, Dino hired friend and fellow chef, Francois Lieutaud to create a unique paring of French and Italian cuisine. The combination made for an old world European feel and customers loved the larger selection of dishes. Capone’s remodeled and expanded into the space next door late last year.

Dino and Francois rejoined again and started Mona Lisa Cucina with a large variety of gourmet pasta’s and pizza’s to serve the Huntington Beach community. From their early experiments with simple, basic foods grew an appreciation for the sensuality of texture, presentation and fragrance.

The newest addition to Chef Dino’s family of restaurants is The Black Trumpet. This establishment specializes in Mediterranean tapas, small plates that bring the guest the flavors of Italy, France, Greece and Morocco.