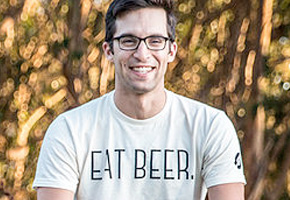 “When we started homebrewing beer as underage students at UCLA, we certainly did not predict it would lead to this.”

“Here’s what caught us by surprise: with every batch of beer made, we were left with a crazy amount of “used” grain! We understood that the sugar from the grain was somehow being turned into fresh barleypop, but what about the grain? What the heck were we supposed to do with that stuff?? And there was a lot of it!!”

“We didn’t have a compost bin, let alone any farm animals to feed out back of our frathouse homebrewery. So, week after week, vats of oatmeal were tipped into the dumpster. An idea struck. Sure, we didn’t have farm animals, but we had plenty of the next best thing: hungry party animals.”

“So, we set out to bake a sort-of whole grain bread using the leftover grain. We could become the cure for cases of the common drunchies.

After a few months of baking a dozen or so loaves of bread per week between beer making (with some studying in between), a few things became apparent:

“So, we decided to make a go at a broader business model. ReGrained would not just be a bakery, but more of a go-between the brewing industry and local food systems. It would be both a service provider and a manufacturer. Eventually, we would upcycle all of the grain from every urban brewery in the world!”

“First, we decided, we should start with a product. We liked the bread, but baking it was time consuming, labor intensive, and the shelf-life was short. We needed something more practical.”

“We put our heads (and appetites) together. Jordan’s (Schwartz) crowded apartment kitchen Became our startup’s “garage,” and we developed an evolving recipe of small batch granola bars. Batch after batch we baked until we had something that we believed could have some legs. We believed in our idea, and that if we kept at it, we could turn it into something meaningful.”

“ReGrained has since become a full-time pursuit, and we couldn’t be more excited. We are hard at work every day earnestly growing our bar line, as well as developing other applications for ReGrained grain. We appreciate how far we have been able to take the company from ourcramped UCLA kitchen, but the best is truly yet to come.”