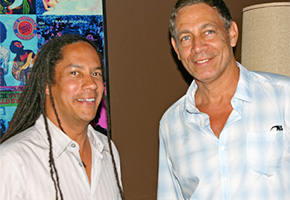 Brad Johnson’s & Chef Govind Armstrong’s Post & Beam officially opened in early 2012 on the West side of the Baldwin Hills Crenshaw Plaza (across the parking lot from the Debbie Allen Dance Academy) in an extensively remodeled, free-standing building with patio which had previously been a Golden Bird Fried Chicken stand.

There is a fairly extensive on-site herb garden on the patio with raised beds. One entire wall of the patio is covered with trailing passion fruit vines. The highly perishable fruit is creatively used there seasonally in salad dressings and desserts.

“No stranger to the dining scene in Los Angeles, Brad Johnson’s and Chef Govind Armstrong’s venture, Post & Beam, is intended to bring warm hospitality, exciting, yet approachable cuisine and good times to the surrounding neighborhoods of the Baldwin Hills Crenshaw Plaza. Brad has created memorable places since relocating to California from NYC in 1989. Remember Georgia on Melrose Ave.? That was him, minus some of the gray hair.”

Among Chef Govind’s numerous local credits of note are the fondly remembered Chadwick (Co-Executive Chef) in Beverly Hills and Melrose’s Table 8. He started in the kitchen at Spago at the tender age of 13.

Dinner nightly and Weekend Brunch. Brad is pretty partial to their pancakes. “The SoCal Restaurant Show” is a fan of the buttermilk waffles. Decide for yourself…

It’s 5 successful years later and we’ll get updates from the principals themselves, Brad & Chef Govind.