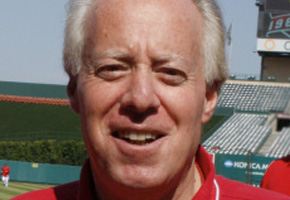 Since 2002 Terry Smith has been the official play-by-play radio voice of the Angels on AM 830 KLAA, the flagship radio home of Angels Baseball. Terry is a foodie and during the season has the special opportunity to be on the road in some of the best dining cities in America.

Smith joined the Angels in 2002 after serving as the radio voice of the New York Yankees Triple-A affiliate Columbus Clippers for 19 seasons. From 1983-1997, Smith also served as Sports Director on WBNS AM in Columbus, Ohio and was simply known as “The Voice” serving as play-by-play announcer for the Ohio State University Football and Basketball Radio Network from 1986-1997. Smith was recognized three times by the Ohio Associated Press for his sportscasts and WBNS AM was named the Outstanding Sports Operation in Ohio six times by the Associated Press.

We’ll break bread with Terry Smith and, unusually, talk food and life on the road for six months of the year!

Terry’s favorites in Orange County are Bistro K in Laguna Niguel (owned by Aristotle Onassis’ former executive chef for his magnificent yacht, the Christina O,) Brick Pizzeria in San Clemente, Mama Cozza’s (for Pizza) in Anaheim near The Big A and North Italia in Irvine. His Santa Barbara picks include The Palace Grill (Cajun – Creole fare and initially suggested by Angels Skipper Mike Scioscia,) and Boathouse at Hendry’s Beach (on the beach with panoramic ocean views.)