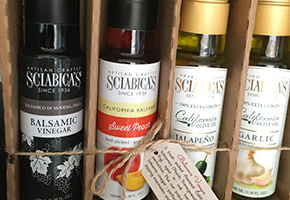 Sciabica’s California Olive Oil has been cold pressed in California since 1936. The olive oil is used in the kitchens at Pechanga and Sciabica’s, now in its 4th generation of Family ownership, is part of the Microbrew Festival.

“The Sciabica family’s long tradition of olive oil production began in Sicily, in the olive oil mills of Castelvetrano in the province of Trapani – a region famous for olives and olive oil. In 1887 Nicola (Nick) Sciabica was born in Marsala, Sicily and as a young man, he learned the ancient art of producing olive oil in Trapani.”

“In 1911 Nicola immigrated to the United States, settled and started a family in Waterbury Connecticut, but longed for the warm Mediterranean climate. After many years of searching, he eventually found Modesto, California. He fell in love with Modesto. Nicola said, “This is like home.” and in 1925, with his wife and their 3 sons, he purchased a small ranch in Modesto.”

“In the late 80’s the family pioneered “single varietal” olive oils, keeping individual olive types separate (just like wine). For over 30 years we have been offering our single varietal olive oils under the Sciabica’s® label, ranging from Buttery-Sweet to Peppery & Robust, depending on the olive varietal and season of pressing. In the 90’s the family again blazed a new path with ‘Fresh Flavored’ olive oil, uniquely made fresh in the press by sending fresh fruit, herbs or peppers (such as Lemons, Basil and Jalapeños) with the olives through the presses. 2 ingredients, no artificials or heat infusion, resulting in a remarkable fresh flavor and health experience.”