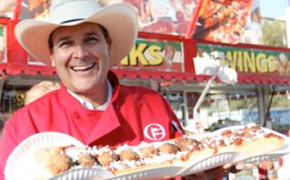 We always look forward to sharing with you the new, creative and sometimes outrageous taste sensations at The Orange County Fair on now through August 13th. Selling big from The Midway Gourmet is Flamin’ Hot Cheetos on virtually everything edible including pizza and fresh corn. His unusual nito frozen dessert creations are also the talk of the Fair.

Last year, 50% of Fairgoers surveyed said their favorite part of the Fair is the food. We agree…Fried, sugary or savory – and sometimes all three at once – the delectable edibles are some of the big stars of the OC Fair.

Chef Dominic’s Fair edibles on the RCS Midway just swept the Concessionaires’ Cup 2017 Awards including the recognition for “Best of the Best” single fair food item. We’ll get a mouthwatering update from The Midway Gourmet as the OC Fair enters its concluding week. Additionally Cowboy Kettle Corn’s (on the RCS Midway) Nitro Candy Caramel Popcorn garnered The Gold/Category Winner for “Most Creative.”

We’ll get a mouthwatering update from The Midway Gourmet as the OC Fair enters its concluding week.

If you perhaps missed Chef Dominic at the OC Fair you can still enjoy his pantry of incredible Fair menu creations (both “Hot” & “Cool”) at the LA County Fair in Pomona running from September 1st through 24th.