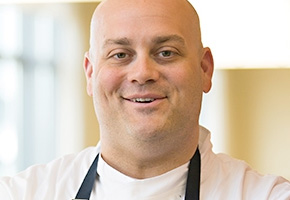 Cleveland’s other popular celebrity chef, “Rocco Whalen, if nothing else, is wrapped up in the love of cooking: the idea and vitality of it, the doing of it, the invention and sustainability of it, the day-to-day enrichment of it, and, ultimately and significantly, the memory of learning all about it from his mother, Rosie.

All combine as convictions he affectionately shares with his regulars and first-timers who dine at his remarkable restaurant, Fahrenheit in historic Tremont, a stone’s throw from downtown Cleveland.”

“In 2001, Whalen returned to his native Cleveland from Los Angeles, landed a job as sous chef at Blue Point Grille, a seafood restaurant in downtown Cleveland. With recipe spins from Spago and variations on what he felt would work in a seafood restaurant in a city with a reputation for meat and potatoes, Rocco revised and refined the menu with items such as tuna sashimi, a whole catfish stuffed with ginger and served with coconut and citrus ponzu, and chicken spring rolls. After 18 remarkable and successful months at Blue Point it was time to move on.”

“A friend told him of a space for sale in Tremont, a trendy urban neighborhood five minutes from downtown Cleveland. Rocco bought the space, kept the purchase quiet, tossed a couple of “friends and family” tastings; but, for the most part, flew under the radar until he officially opened Fahrenheit, Oct. 2002. In less than a year, he doubled his projected top line dollars.”

Chef Rocco was just in Los Angeles for the annual Stu & The Kids Benefit at Vibiana in Downtown Los Angeles (July 30th) and will be back here on September 9th for the 8th Annual L.A. Loves Alex’s Lemonade Culinary Cookout at UCLA’s Royce Quad.