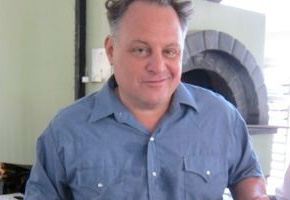 Chris Bianco is the chef-owner of the award-winning Pizzeria Bianco, as well as Pane Bianco and Tratto, all located in Phoenix, Arizona. He also produces a lineup of organic tomatoes, Bianco DiNapoli, and early next year will open an eagerly anticipated restaurant (Tartine Manufactory) project with many components in Downtown Los Angeles in ROW DTLA, a collaboration with his friend and founder of San Francisco’s Tartine Bakery, Chad Robertson.

Bianco won the James Beard Award for Best Chef Southwest in 2003 and helped spawn a generation of independent and artisanal pizzerias, lending his advice, wisdom, and food philosophies to dozens of fellow chefs and restaurateurs.

His new cookbook is Bianco: Pizza, Pasta and Other Food I Like. “The book features recipes for his signature pizzas as well as strategies and techniques for translating chef’s methods to the home kitchen. Bianco celebrates both the simple and the nuanced, revealing the methods that lead to the perfect crust, the sweetest tomato sauce, the creamiest mozzarella, and the most expertly balanced flavor combinations. It also features recipes for salads, antipasti, and dessert options, as well as family meals that are cooked behind-the-scenes. Also, a new array of big plates showcased at Chef Chris’ highly regarded restaurants.”

We’ll meet him as he’s on his way to the Phoenix Farmers Market.