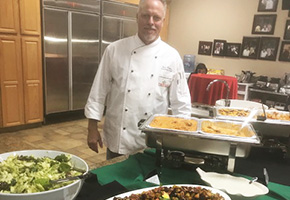 Tom Fraker, a Melissa’s Corporate Chef and the manager of the Melissa’s Corporate Test Kitchen, came to cooking late as a second career. He was the oldest student in his class at the California School of Culinary Arts Le Cordon Bleu and was the recipient of a lot of teasing.

As a high-profile Melissa’s representative he participates in special events, trade shows, and culinary functions throughout the country. He also creates many of the great, tested recipes on the genuinely useful Melissa’s Website that are designed to be easy-to-prepare winners in home kitchens.

Tom created most of the recipes for Melissa’s The Great Pepper Cookbook – The Ultimate Guide to Choosing and Cooking with Peppers. These were all represented on the buffet in the Melissa’s Test Kitchen for the audience to enjoy at the 5th Anniversary celebration of the “SoCal Restaurant Show.”