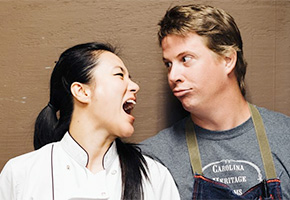 Earlier in the year we introduced you to the pride of southern BBQ, the Heirloom Market BBQ in Atlanta established in 2010. The youthful owner/chefs are Cody Taylor and Jiyeon Lee. They are prominently featured in the “Smokehouse Stories and Recipes” section of Matt Moore’s The South’s Best Butts – Pitmaster Secrets for Southern Barbecue Perfection.

Atlanta Magazine has consistently recognized them as one of the “50 Best Restaurants in Atlanta.” Quite an honor for a modest establishment which is housed in 720 sq. ft. and is essentially to-go because much the limited patio seating is stand up.

Chef Jiyeon is Korean so one of the available winning sauces is KB Sauce (Korean BBQ Sauce) with a dash of sweet heat. It’s mouthwatering American BBQ with an unintentional Korean influence.

Pork is the house specialty here but all the meats are worthy of deserved praise. Don’t miss the unusual Kimchi Slaw, a happy accident.

Executive Producer Andy Harris recently made the pilgrimage to Heirloom. It really was as good as Matt promised and an experience to see during their lunch rush.

Chefs Cody and Jiyeon are our guests.