Now an enticing preview of Saturday’s mouthwatering show. It’s not, with profuse apologies, for dieters. If we’re successful we will always leave you incredibly hungry and thirsty. In our case, upon careful reflection, that’s probably a pretty good thing…

Earlier in the year we introduced you to the pride of southern BBQ, the Heirloom Market BBQ in Atlanta. The youthful owner/ chefs are Cody Taylor and Jiyeon Lee. They are featured in the “Smokehouse Stories and Recipes” section of Matt Moore’s The South’s Best Butts – Pitmaster Secrets for Southern Barbecue Perfection.

Executive Producer Andy Harris recently made the pilgrimage to Heirloom. It was as good as Matt promised and an experience. Chefs Cody and Jiyeon are our guests.

Executive Producer Andy Harris was in Roswell, GA (an incorporated City of 95,000 in the greater Atlanta area with a lot of living Civil War history) in early October with fellow members of the International Food Wine and Travel Writers Association (IFWTWA.) In this show we continue our coverage of the best of Roswell with a chat with Chris Nelson, the new Executive Director of the 120,000 member Chattahoochee Nature Center.

The much-honored Ranch Restaurant in Anaheim was the recipient this year of The Golden Foodie Award for the Best Entrée in Orange County. That is Executive Chef Michael Rossi’s signature Cowboy Ribeye. That’s a 58oz. bone-in rib chop with Grafton Farms white cheddar scalloped potatoes and Sauce Bordelaise. Oh yea…We’ll get Chef Michael out of the kitchen to chat about the extraordinary project that is The Ranch Restaurant.

2017 marks twenty-three years of the Festival Gourmet International in Puerto Vallarta. In 1995 Chefs Thierry Blouet and Heinz Reize came up with the idea of ​​promoting and elevating the culinary level of this region to competitive international standards, interacting with new methods and the creativity of highly qualified Chefs from around the globe. The goal of this 10-day, great party was to strengthen the gastronomy of Puerto Vallarta as an exemplary showcase and to promote the destination through the excellence of the good table. Chef Thierry Blouet joins us from his sister Café des Artistes in Los Cabos.

Long Beach’s Chianina Steakhouse and Michael’s On Naples Ristorante are joining together the evening of Wednesday, November 15th to raise money to support the Sonoma County Resilience Fund and The Napa Valley Community Disaster Relief Fund. The only expense deduction from the $175 ticket price is for the servers’ gratuity. All other monies are being donated so you know your dollars are really going to support the relief effort! For Tickets to this event, you can order here or also from here. 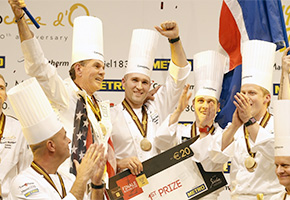 Earlier in the year in Lyon, France Team USA led by Chef Mathew Peters earned the Gold statue in the prestigious, biannual Bocuse d’Or International Culinary Competition. It was a proud first for USA in the long history of the Bocuse d’Or.

In Las Vegas on Thursday, November 9th at The Palazzo Ballroom at the Palazzo & Venetian Resorts in Las Vegas 3 chefs will compete for the right to represent Team USA 2019 in Lyon. It’s an all-day event and spectator tickets are available. The day before in Las Vegas is the 2017 Ment’or Young Chef & Commis Competitions. Also a fun spectator event.