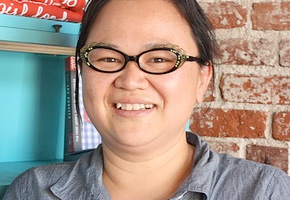 In it’s 2nd season on KCET is “The Migrant Kitchen,” an Emmy-winning series. The 4-episode series explores how the next generation of chefs is creating cuisine inspired by the immigrant experience. Chef Diep Tran of Highland Park’s Good Girl Dinette is part of the upcoming “Beyond Pho” episode.

Airing on Wednesday evening, November 29th is the “Beyond Pho” episode of “The Migrant Kitchen.” Banh Mi. Spring rolls. Pho. The war and its subsequent refugees. These are things most commonly associated with the Vietnamese culture and its people. But a group of chefs in Los Angeles (including Cassia’s Bryant Ng and Kim Luu-Ng, Diep Tran of Good Girl Dinette, and Minh Phan of Porridge & Puffs) are hoping to demonstrate that there’s so much more than that. Featured in the episode: Cassia in Santa Monica, Good Girl Dinette in Highland Park, Red Boat Fish Sauce.

The second season of the James Beard Award and Webby-nominated series, continues to spotlight chefs who are combining traditional, ethnic cuisines with new flavors and fresh techniques that have transformed the culinary landscape of the city, making it one of the food capitals of the world. Season Two examines tradition and innovation in cuisines celebrating the food cultures of Mexico, Vietnam, Japan and India, as well as their various interpretations found in Los Angeles.