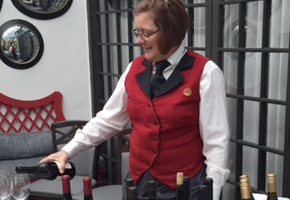 SideDoor is known for its award-winning cheese and charcuterie offerings, and in 2017 began presenting a new series dedicating one evening a month to boutique creameries and specialty cheeses. A different creamery is featured at each event, and twice a year the series culminates in the ultimate celebration of fromage with the Cheese & Charcuterie Backyard Party – the next taking place on Wednesday, January 17, 2018.

The evening will showcase the previous four creameries of the series including Jasper Hill (September 2017), Rogue (October 2017), French Theme (November 2017), and Andante (December 2017), and offer cheese, charcuterie, passed appetizers and beverage pairings. SideDoor’s own certified expert and cheese monger, Tracy Nelsen, will be on hand to educate guests on the various cheeses presented and to recommend the perfect pairings.

SideDoor is Corona del Mar’s first and only English gastropub. A red key hangs over the entryway on Poppy Street as an unspoken invitation to indulge in world-class spirits, craft beer and wine flights.