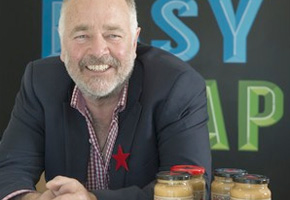 “My Mum and Auntie had made a bit of peanut butter when I was little. They’d both bought a new Vitamix and peanut butter was one of the cool things you could make with them. Anyway, I bought a few kilos of peanuts, roasted them in the oven and squished them up with a bit of salt, blowing up my cheap modern blender in the process.”

“But the peanut butter was beautiful. A million times nicer than the stuff I’d got used to. I filled a few jars for friends, and one of my twelve year old son’s mates liked it so much he bought a jar with his pocket money.”

“I was fifty- five, going a bit blind (macular degeneration runs in the family) and had just had to close a little Laundromat that had been earning me a couple of hundred dollars a week. I figured if I could make 30 jars of peanut butter on Friday morning I could sell it at our farmers market on Friday afternoon and get my $200 back.”

“So that’s what I did. I made a roaster out of a concrete mixer and bought a bench top grinder and a tonne of peanuts from Australia and got to work.” –Pic Picot