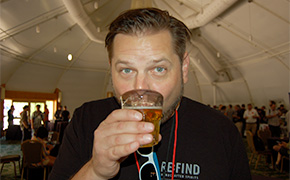 The 5th Annual Firkfest Cask Beer Festival is back on March 24th at the Anaheim Packing District Farmers Park. This year, again, it’s a Tiki theme. All the cask beers served are made specifically for the event. They may never be brewed again.

“Of the hundreds of different flavors of beer, a large portion can be described as “tropical”. Whether it be IPAs bursting with mango, pineapple, or passion fruit hoppy notes; stouts with Pina Colada and Mai Tai vibes, or even Belgian-style beers with Zombie cocktail overtones…don’t be surprised to see this year’s Firkfest beers to include “aged in rum barrel” or have actual barbecued pineapple making up the event’s beers.”

New this year is the well-respected OC Bartenders Cabinet will be shaking up actual Tiki cocktails for demonstration and sampling. Several bartenders are teaming up with breweries to also collaborate on tropical/tiki-style cask beers.

“Looking at the previous Firkfest events, I saw a common denominator: tropical-style beers seemed to stand out. As a huge cocktail nerd that loves Tiki culture, it’s time for the area’s craft brewers to come together, throw on some grass skirts, and make something truly unique,” says founder, organizer, and local beer writer Greg Nagel, @OCBeerBlog.

Tickets are $50 including fees, all profits supporting the historic Anaheim Fall Festival and Halloween Parade, an event that celebrates a 95-year history. Event tickets are by-design, limited, as the producer keeps things intimate. “It’s a park-like atmosphere, where people chill on beach blankets and chairs,” says fest-man Nagel.

Murrieta’s Inland Wharf Brewing Co. (previous guests on the show) will be there as well as El Segundo Brewing Co., Smog City Brewing Co. and TAPS.

Founder, organizer, and local beer writer Greg Nagel taps the cask for us.