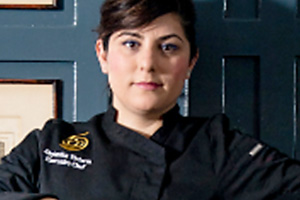 Chef Padilla comes to Five Crowns and SideDoor from Hillstone Restaurant Group, where she served as Culinary Manager since 2015. Prior to joining Hillstone, Padilla moved up the ranks at Patina Restaurant Group where she started in 2010 as Sous Chef at La Fonda Del Sol in New York before moving to Los Angeles to take a position as Sous Chef at Nick & Stef’s Steakhouse. She was quickly promoted to Executive Chef, a position she served at two different Market Café locations in Los Angeles.

Chef Alejandra appeared on Cooking Channel’s Unique Eats in 2010 and was also the winner of the Season 6 premier episode of Food Network’s, Chopped in 2011.