Now a sinful preview of this Saturday’s properly decadent show. It’s not, with profuse apologies, for dieters. If we’re successful we will always leave you incredibly hungry and thirsty. In our case, upon careful reflection, that’s probably a pretty good thing… Keep in mind we’re here with you live every Saturday morning with a fresh show.

Over the past two years we’ve been reporting on the progress of the ambitious, on-going expansion plans for the Pechanga Resort & Casino in beautiful Temecula Wine Country. $300 million dollars later all phases are now complete (including the luxe 568 room Resort Tower addition) and welcoming the curious guests. 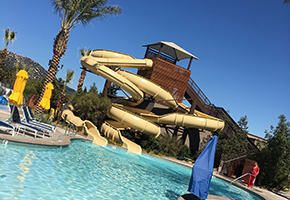 The most ambitious of the new restaurants is the Lobby Bar & Grill located in the striking Atrium between the Casino Hotel Tower and the Resort Hotel Tower. Overseeing this stylish new California bistro and bar serving breakfast, lunch, Sunday Brunch and dinner is Chef Jose Mendoza. We’ll meet him.

The water’s just fine at Pechanga’s just-opened, 4.5- acre tropical oasis, The Cove, that promises comfort, cool and the ultimate tropical chill to guests. There is even a swim-up bar. Managing all of this hospitable craziness is Jane Kim. We spirit her off the busy pool deck for a chat.

Chef Ronnel Capacia is no stranger to the “SoCal Restaurant Show.” We first met him when he assumed the culinary reins of Kelsey’s. When we last chatted with him he had just been promoted to oversee Journey’s End at Pechanga. Now he’s also taken on the added responsibilities as menu-maker for the Coveside Grill at The Cove. That includes a table service restaurant as well as a fast -casual spot. Think Potato Chip Nachos.

All of the lavish desserts and breakfast pastries are produced in-house at Pechanga. They also create magnificent custom and wedding cakes. The bake shop also crafts artisan chocolates. Pechanga’s assistant pastry chef Nicole Burgess has an artful hand in all of this. She joins us.

One of the newest craft breweries in the Inland Empire is Inland Wharf Brewing Co. in Murrieta. Their specialty is cask conditioned ales. We introduced them to our audience last year at Pechanga’s 9th Annual Microbrew Fest & Chili Cookoff. It’s been a year of great progress. Now their craft beer is on the beverage menu at The Cove. They are also back at Pechanga’s upcoming 10th Annual Pechanga Microbrew Fest & Chili Cookoff on Saturday afternoon, June 9th. Owner Commander (Retired) Robert Durant is our guest.

The effervescent Chef Marlene Moore of Temptations Food Walk at Pechanga probably needs no introduction. At Temptations she even fries fresh donuts right there throughout the day & night. When it comes to Pechanga’s Annual Microbrew Fest & Chili Cookoff Chef Marlene (and her high energy team) are always in it to win it. Last year in a bit of an upset Chef Marlene (Pechanga’s 2-time Chili Champ) was unseated by Chef Ikeda of Umi Sushi & Oyster Ba whose sake-glazed Kobe beef chili reigned supreme.