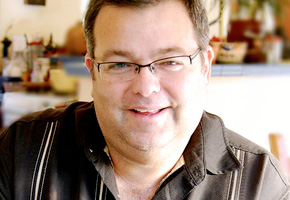 In a few short years, Steve Sando has taken the lowly bean from a healthy but neglected, over-bred member of the vegetable family to a near superstar-status ingredient. Sando’s company Rancho Gordo, grows heirloom and heritage varieties and works with influential chefs like Thomas Keller, Deborah Madison, Paula Wolfert and Annie Sommerville. His new book is The Rancho Gordo Vegetarian Kitchen – Everyday Cooking with Heirloom Beans, Vegetables, Greens, and Grains.

“My first harvested heirloom bean was Rio Zape. They were pretty and easy to grow but I had no idea what to expect when I cooked them. They were similar to the pintos I liked but there was so much more going on. “Hints of chocolate and coffee mixed with an earthy texture made my head spin. I was blown away by Rio Zape and the other heirloom beans I was growing, but also really confused why they were such a big secret. I took the beans to the farmers market, organizing things on my kitchen table. Soon there was a warehouse, followed by more markets and mail order. It seems we had struck a nerve. People agreed that heirloom beans were worth saving, growing and cooking. Currently our warehouse, a retail shop and offices are in Napa, California and a stop here is part of many tours of the wine country. We were asked to open a store at the Ferry Building in San Francisco and as you can imagine, we jumped at the chance.”

“All of my agricultural pursuits have been based on being someone who likes to cook but gets frustrated by the lack of ingredients, especially those that are native to the New World. One of the things that originally drew me to beans was the fact that they are indigenous to the Americas. It seems to me these indigenous ingredients should be familiar, if not common. American cuisine is re-inventing itself and I’d love to include ingredients, traditions and recipes from north and south of the border as part of the equation. I love the concept of The Americas. I feel as if it’s just as important as the European heritage many of us share.”

On Sunday, July 8th, Rancho Gordo will hold is first-ever supper in Southern California at Alta Baja Market in Santa Ana. The event is “Rancho Gordo Goes to Alta Baja with More (Culinary) Stars than in the Heavens!”

All the food is donated by Rancho Gordo. All proceeds go to the arts program at Valley High School in Santa Ana.