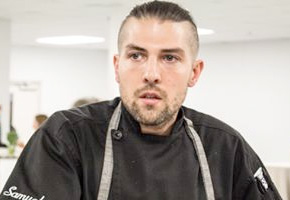 “After a year on the road getting in touch with their roots and cultivating the essence of Southern cuisine, South City Fried Chicken Co-Owners Joshua Kopel and Chef Sammy Monsour returned to Los Angeles with the innovation and grit to tackle their second venture together. “South City Fried Chicken is the canvas on which to experience a story that is important to Josh and I,” says Monsour. “Our food honors Southern culture, the people we come from, and connects us with our guests.””

“Setting out with the intent to not only create the most delectable Fried Chicken Sandwiches in the West, but as an homage to the people of the South, Chef Sammy set his standards high from the get-go with an adamant motto: No heat lamps, no freezers, no excuses. Everything on the South City Fried Chicken menu is made-to-order, maintaining farm-to-table concepts by utilizing the same local vendors as fine dining big sister restaurant Preux & Proper. No detail is too small, from the homemade pepper mixes and sauces, to the employment of Jidori chicken, an artisan-take on poultry farming by utilizing hand-pulled methods over machines, and brioche buns from La Brea Bakery.”

Each Fried Chicken Sandwich begins with succulent Jidori chicken in marinade and buttermilk brine, marinating together for a minimum of 24 hours. When it is finally ready to go, the last step is dredging the chicken in the “stay crispy batter” before getting fried to perfection and seasoned according to each sandwiches destination. Described by Chef Sammy as “A love letter to the South written in flavor,” the South City Fried Chicken Sandwich Menu highlights nine crispy on the outside, succulent on the inside offerings, eight of which feature namesake cities that are major players in Southern cuisine.

Owner Joshua Kopel and Partner & Executive Chef Sammy Monsour join us to crow about the opening.