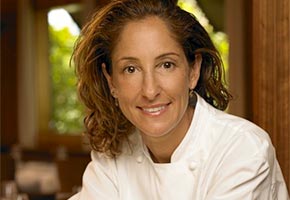 “Suzanne Tracht, chef and owner of the critically-acclaimed Jar Restaurant, was born and raised in Phoenix, Arizona. She began cooking professionally at the age of 19, when she left college for an apprenticeship under Siegbert Wendler, legendary chef at the four-star Arizona Biltmore Resort and Spa. After three years she moved to Southern California to work in the kitchen of the prestigious Hotel Bel-Air and later served as sous-chef at Noa Noa. In 1992, she became chef de cuisine at Nancy Silverton and Mark Peel’s Campanile. Four years later, she embarked on her first solo venture at executive chef at the Cal-Asian restaurant, Jozu. In its debut year, Jozu ranked number two for “L.A.’s Best New Restaurants” in Los Angeles magazine’s restaurant issue.”