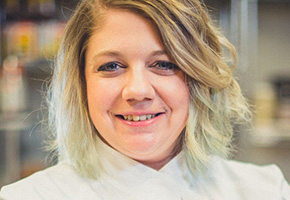 Pechanga’s Chef Krystle Schenk was promoted to Garde Manager Chef a year ago. Chef Krystle has been with Pechanga since 2010, starting off as a line cook in the production kitchen and was quickly promoted to other positions at the Pechanga Buffet, Kelsey’s, and Garde Manger before she became its head chef.

For the “Loaded Fries” competition as part of “Battle of the Burgers” Chef Krystle is the Sous Chef for Mattie Dominguez, one of the 3rd year Career Technical Education students in the Culinary Arts program at TVHS.

Prior to Pechanga, Krystle worked in the kitchen at a popular international hotel chain for five years and really honed in her best cooking techniques. She jumped straight into culinary school at The Art Institute of California at Orange County immediately after graduating high school, as she has thoroughly enjoyed the art of cooking since she was a child.

We’ll meet Chef Krystle and find out what goes on in Garde Manager. It’s both an important position, and place, in a restaurant kitchen.

Update: Congrats to Chef Schenk and “Chef” Mattie of TVHS. Mattie’s Loaded Fries was the People’s Choice Winner for the “Loaded Fries” competition. The creation is Waffle Fries with Sriracha Shredded Chicken with Maple Bits and Spiced Caramel Sauce.