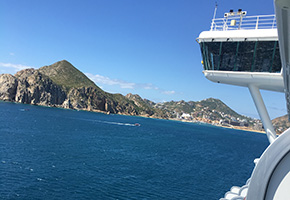 Now an enticing preview of this Saturday’s properly celebratory show. It’s the 6th Anniversary of the launch of the “SoCal Restaurant Show” and we’re celebrating in style with Princess Cruises aboard Ruby Princess. It’s not, with profuse apologies, for dieters. If we’re successful we will always leave you incredibly hungry and thirsty. In our case, upon careful reflection, that’s probably a pretty good thing…

This week we’ve been aboard Ruby Princess for a 5-Night sailing to Cabo San Lucas in Baja California. Today’s show will highlight this experience from the luxe accommodations to the diversity of the appealing cuisine and memorable shore excursions in Cabo. Thanks to Princess Cruises and the wonderful team aboard Ruby Princess, especially Food & Beverage Director Andrea Baiardo, for all the gracious hospitality. I was among the 3,000 guests aboard.

The inaugural cruise of Ruby Princess was November 8, 2008. It’s 951 feet in length with 1,200 in crew.
Riccardo Capraro is the Hotel Director aboard Ruby Princess. After the Captain he’s the next highest-ranking officer aboard ship. He’s responsible for just about everything other than safely maneuvering the ship. Huge responsibility. Ricardo has served 22 years with Princess Cruises and speaks English, Italian and Spanish.

What’s a cruise without appealing food and a range of creative libations?  On Ruby Princess this is the responsibility of Andrea Baiardo, the Food & Beverage Director. We’ll meet Andrea, an executive chef by experience and training, and a five-year employee of Princess.

Distinguised chef Pierre-Marie Leprince is Princess Cruises’ Director of Guest Culinary Experience. We chatted with him earlier this year after visiting his impressive research kitchen in Santa Clarita and he now encores with us to discuss our cruise dining experience aboard Ruby Princess.

Bill Esparza is winner of a James Beard award (with Lesley Bargar Suter) for his coverage of the LA taco scene in Los Angeles Magazine. Considered one of the country’s leading experts on Mexican food, the LA native previously curated the annual Tacolandia festival in Los Angeles (now on hiatus) and writes about Mexican food for Los Angeles Magazine and other notable publications. Bill is a new Princess spokesperson and authoritative Latin America shore excursion consultant.