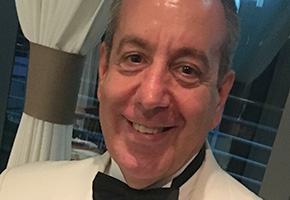 Aboard a luxury cruise ship dining is a paramount part of the guest experience. The person responsible for overseeing the guest dining experience in all the dining rooms aboard ship is the Maitre d’Hotel.

On Princess Cruises’ Ruby Princess that individual is the charming Giorgio Pisano, a 42-year veteran of Princess. It’s a tough assignment with 3,000 guests to pamper in all the dining areas for every voyage. He graciously presides over very special occasion celebrations in the guests’ lives including milestone birthdays, anniversaries, renewal of vows and honeymoons.

Giorgio was born in a beautiful, small village in the South of Italy, Pizzo Calabro. His first posting with Princess was on the Island Princess (original) in 1976 as a Buffet Steward. He spent his vacations working in hotels in and around Italy. His eagerness for learning and achievement helped him move very quickly through the ranks until he was appointed to the position of Maitre d’Hotel in 1992.

Giorgio takes a break from turnaround on the Ruby Princess at the Port of Los Angeles to join us.