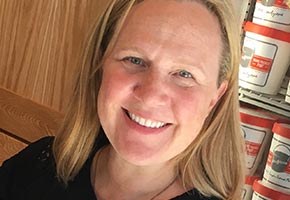 “Our story is part luck, part strategy and part love (for ice cream, family, local foods, and other stuff we can’t mention here). I (Kim) have been wanting to open an ice cream scoop shop since 1996. I thought it would be nice to have a local spot where you could run into your neighbors, celebrate with your family, reward yourself…whatever! And I love exploring fun, interesting new flavors. After toiling away in safe mode working for several amazing Fortune 500 businesses, I moved back to Portland for love and found the window of opportunity and support that I’d been lacking to jump start my idea.”

“In the meantime, my cousin Tyler had been studying in China and traveling in Asia. He completed his business degree and had just announced to the family that he was going to enroll in Culinary School. I actually saw a posting on Facebook that he was considering moving to Portland and phoned him up…not even knowing about his plans! We traded stories and updated each other – coming to realize we are on similar paths by coincidence. Next thing I knew, I was getting reports from Tyler regarding ice cream tests he was running with his friends and family as tasters. He had a million ideas and wanted to join me in this crazy idea. How could I resist? He literally dropped what he was doing, loaded up his car and drove to Portland from Seattle to start work as our head ice cream maker the very next day. I would probably be somewhere rocking back and forth in a corner without him. He’s amazingly talented, super smart, hard-working, and quite possibly the nicest person ever.”

“We’re hoping to create the kind of company that’s fun to support, work for, and partner with. We’re about building strong local community – both in the neighborhoods where we do business and by purchasing as many local products as possible (to keep our money in Oregon and help create stronger local economies).”

Co-Founder Kim Malek is our guest.