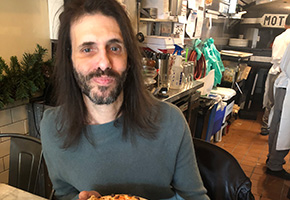 Adam Bell is one of the talented people at-work behind- the- scenes on the “SoCal Restaurant Show.” Since the beginning of the show over six years ago he developed and maintains the Website in addition to ably orchestrating the Social Media. He’s also a card-carrying foodie with a particular passion for pizza, craft beer, ethnic street food and coffee. Adam has recently returned from an intense week in New York doing a deep dive into the food scene.

This is Part 2 of his trip highlighting his best edible (or quaffable) discoveries on this expedition. Adam talks about his favorite New York City Food Hall and New York restaurants with new outposts in Southern California. Also a profile of some dining options (including Tom Colicchio’s Temple Court) in the historic and architecturally significant Beekman Hotel dating back to 1881.