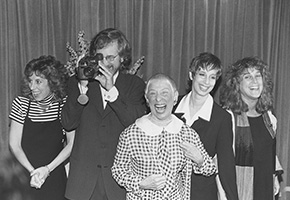 “Ms. Adler, whom friends and family alike referred to as “LeeLee,” was a concert pianist and an artist, and also a proud mom of four talented children – Steven, Nancy, Anne and Sue Spielberg, a fact that was celebrated throughout the restaurant in the form of a memorabilia-filled room that became as much a salon as the perfect place to drop by for a plate of blintzes.”

“Our mom had a gypsy spirit that was larger than life itself, with an unstoppable energy and a fiery confidence that was reflected in the halls of The Milky Way,” said the Spielberg family in a joint statement. “LeeLee opened the restaurant with the vision of offering fine kosher food to the Jewish community in Los Angeles at a time when such a thing didn’t exist. Though her passing left a deep void in our hearts, we hope the new Milky Way will not only honor her memory, but also give back to the community she loved so deeply.”

“The Milky Way may be a kosher dairy restaurant, but it is also a New American Kosher restaurant,” said Chef Phil Kastel. “We wanted to create an inclusive and welcoming place for everyone, regardless of their faith or adherence to a specific dietary restriction. What will resonate with diners most is just how comforting the food here is – all the dishes on the new menu honor LeeLee and her unique tastes and are updated but true to her legacy at the same time.”

Executive & Restaurant Consultant Phil Kastel of PK&J Hospitality Group is the Creative Chef at The Milky Way and is out guest.