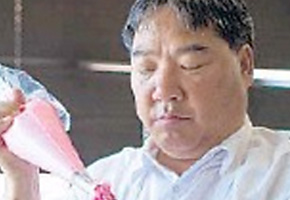 “Founded in 1938, the idea behind Chinatown’s landmark Phoenix Bakery was to create a gathering place for the community producing traditional Chinese pastries and cookies not found locally. At the time, Chinatown was truly the place where Chinese immigrants came together and the iconic architecture and plazas were opening.”

“It wasn’t until the 1970s, however that Phoenix Bakery became famous throughout Los Angeles for being a little Chinese bakery making a “not so Chinese” cake. With business flourishing, in 1977, the Chan family moved from Chinatown’s Central Plaza to a custom-built bakery on Broadway that remains their current location today.”

“Catering both to the local population celebrating birthdays and to the thriving businesses operating downtown, Phoenix Bakery cakes started becoming traditions. Lun’s son, Youlen eventually took over production and Phoenix Bakery continued to thrive as he expanded the offerings of sweets and confections.”