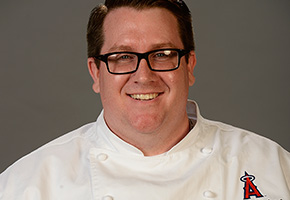 Robert Biebrich is the accomplished Executive Chef for Legends here at Angel Stadium. Chef Robert is with us in-studio to highlight what’s new in Angel Stadium food and beverage for the 2019 season.

He’s particularly proud of the Big A Burger which is a luxe burger creation as well as a new food outlet. Did we hear “Secret Menu”? We’ll ask about “Light It Up Fries.”

Chef Robert is in his sixth full season at Angel Stadium, working alongside Regional Executive Chef Gretchen Beaumarchais and Executive Sous Chef Omar Almaraz. Chef Biebrich leads a team of talented culinary artists, who are constantly developing new food concepts and fulfilling the ever-changing menus for more than three million guests each season at The Big A.