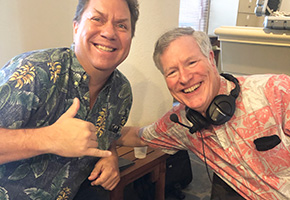 Last year Merriman’s celebrated their 30th anniversary and is consistently the highest rated restaurant on The Big Island. Chef Merriman is one of the original pioneers of Hawaii Regional Cuisine.

“Merriman’s Waimea is the flagship establishment from award-winning Chef Peter Merriman who maintains a single vision “Do the right thing”—for local farmers, for the islands and for you—our guest.”

“Thirty years ago, no one dreamed of growing vine ripened tomatoes, fresh sweet corn or crisp baby lettuce in Hawaii. Sugar cane and pineapple plantations dominated the farming landscape, and most food was shipped to Hawaii from thousands of miles away.”

“Chef Peter Merriman had a vision for the growth of local agriculture and the potential of Hawaii’s rich volcanic soils. He along with twelve other prominent chefs encouraged farmers to grow local produce, raise meats locally, and start a healthier more sustainable Hawaii.”

“Peter Merriman has been as a culinary pioneer in Hawaii for over 30 years. Known as the original “locavore,” Peter is a vocal champion of Hawaii’s farmers, ranchers and fishermen. His restaurants showcase island grown and harvested foods through simple preparations that reflect the myriad flavors of Hawaii’s multiculturalism. Dubbed the “Pied Piper of Hawaii Regional Cuisine” by The Los Angeles Times, he is a continuing inspiration to Hawaii’s thriving culinary scene.”