Now a sinful preview of this Saturday’s appropriately decadent show. We’re in fabulous Las Vegas…It’s not, with profuse apologies, for dieters. If we’re successful we will always leave you incredibly hungry and thirsty. In our case that’s probably a pretty good thing… As always, we greatly appreciate you being a part of our loyal listening audience. 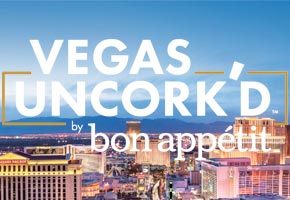 We’re live from Lagasse’s Stadium at The Palazzo Resort for this special show. It’s Vegas Uncork’d Weekend here and the mega-star celebrity chefs with high-profile restaurants in Sin City are in town for the four days of extensive festivities.

One of our most reliable sources of primo restaurant news in Las Vegas is Al Mancini, who is a staff writer for The Las Vegas Review-Journal covering food, restaurants and other aspects of entertainment. Al has been working the Vegas food scene since 2003. He was one of the original creators of the popular, and widely referenced, Eating Las Vegas restaurant guide series. Al joins us for his observations on Vegas Uncork’d, Vegas Unstripped and worthy dining happenings about the town.

The CraftHaus Brewery team is not only passionate about craft beer, but also sharing it with their Las Vegas community. They were established in Henderson is 2014. “Co-owners and married couple, Wyndee and Dave Forrest, conjured up the big idea for CraftHaus Brewery while traveling through Europe. They noticed that they were immersed in a craft beer culture where people take their time to enjoy quality beer just as much as they enjoy talking to the people around them.” Wyndee taps the keg for us.

Chica Las Vegas at The Venetian, now celebrating its 2nd Anniversary, delivers the robust and vibrant flavors of Latin cuisine combined with a dynamic wine and mixology program. Crafted by celebrity Latina chef (and Chica Partner) Lorena Garcia, the diverse menu draws inspiration from classic renditions and provides guests the opportunity to explore the flavors of Latin American cuisine as one culture, with influences from Venezuela, Peru, Brazil, Mexico, and Argentina, among many more. Chef Lorena pops out of the busy Chica kitchen to chat.

The Factory Kitchen, recently launched at The Venetian Resort on Restaurant Row, is the outcome of a long-standing friendship between Restaurateur Matteo Ferdinandi and Chef Angelo Auriana. Ferdinandi and Auriana share the vision of imparting their Italian roots and memories through food and hospitality. The original trattoria, serving traditional Italian recipes, opened its doors on Oct. 24, 2013, in The Arts District, Downtown Los Angeles. The Factory Kitchen takes its name from the street it’s located on and the former factory building complex that hosts it, but the restaurant’s soul is purely Italian. Matteo, Chef Angelo, and Las Vegas Chef de Cuisine Eduardo Perez are our guests.

“Our mission at LIPSMACKING foodie tours is to introduce visitors and locals alike to the best signature dishes, unique preparations and exciting tastes in Las Vegas.  The mouths behind Lip Smacking Foodie Tours love food, eating, dining and experiencing. This quartet of passions originally inspired us to pursue careers in the food, beverage and hospitality industries. And ultimately, after years in the game, we created Las Vegas’ premier walking tour company exclusively geared toward those craving the ultimate taste of Las Vegas.” President & Founder Donald Contursi is our enthusiastic guide.

For the 4rd time in the show’s history we’re happily broadcasting from Lagasse’s Stadium at The Palazzo. It’s a sport’s fan’s and foodies’ paradise. Lagasse’s Stadium is the ultimate sports bar: a restaurant with stadium-seating featuring elevated game-time classics and gourmet options from Emeril Lagasse. Brian Kurata, the able General Manager since 2013, is our winning Coach.