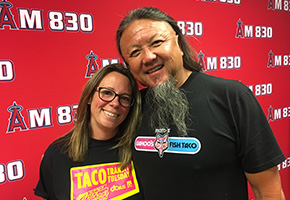 Wing Lam of Wahoo’s Fish Taco is at it again with a special promotion…Ride OC Transit and get a free taco (with purchase) on Tuesdays from any Southern California Wahoo’s Fish Taco location. It’s Taco Transit Tuesday.

The ongoing program, which began in April, allows transit riders to visit any participating Wahoo’s restaurant in Southern California each Tuesday, and when they show a valid OC Bus, OC Flex or Metrolink pass, they can get a free taco with the purchase of a taco.

Wing Lam, co-founder of Wahoo’s is a supporter of public transit to help sustain the environment.

“We all need to do our part: Use less plastic straws and bags, recycle what we can, and use public transportation when possible,” Lam said when the promotion began.

OCTA operates more than 500 buses in the OC Bus system, helping people get to their destinations across Orange County for $2 per ride or $5 per day.

Riding in on an OC Bus with all the details are Wing Lam and Jennifer Bergner, OCTA’s (Orange County Transit Authority) Chief Operating Officer.