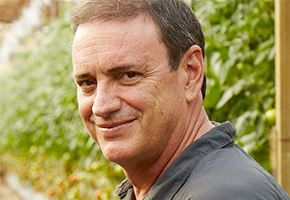 “Peter Merriman (the Founder of Hawaii Regional Cuisine) has been a culinary pioneer in Hawaii for over 30 years. Known as the original “locavore,” Peter is a vocal champion of Hawaii’s farmers, ranchers and fishermen. His restaurants, starting with the iconic Merriman’s Waimea in 1988, showcase island grown and harvested foods through simple preparations that reflect the myriad flavors of Hawaii’s multiculturalism.”

“In 1988, Peter opened his signature upcountry restaurant, Merriman’s, in Waimea on the Big Island of Hawaii. He was proclaimed, “A gourmet in cowboy country” by Hana Hou!, the Magazine of Hawaiian Airlines. The New York Times raved “Everything at Merriman’s…features the freshest local ingredients paired in exciting ways,” and San Francisco Magazine exclaimed “His Wok-charred Ahi is to die for!””

“Two more fine dining restaurants were added to the Merriman’s Hawaii group in 2008 and 2009 – Merriman’s Kapalua, on the grounds of the scenic resort on Maui’s West Side, and Merriman’s Fish House in Poipu, Kauai. Downstairs from the fish house, Peter offers casual dining at Merriman’s Gourmet Pizza & Burgers.”

Last year Peter launched his most ambitious Merriman’s to date, Merriman’s Honolulu, located at the base of the Anaha luxury, high-rise condominium tower at Ward Village. It’s 6,000 square feet and seats 200 guests with patio dining, too. A menu highlight is poke prepared table side. Peter’s son is the welcoming maître d’ there.