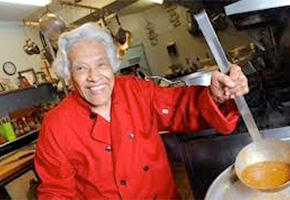 “New Orleans’ revered Leah Chase, passed away surrounded by her family on June 1, 2019. Leah Chase, lovingly referred to as the Queen of Creole Cuisine, was the executive chef and co-owner of the historic and legendary Dooky Chase’s Restaurant. She was a major supporter of cultural and visual arts and an unwavering advocate for civil liberties and full inclusion of all.

“Chef Leah was a proud entrepreneur, a believer in the Spirit of New Orleans and the good will of all people, and an extraordinary woman of faith.”

“In a town deeply divided by segregation, Dooky Chase’s Restaurant was one of the only public places in New Orleans where mixed race groups could meet to discuss strategy for the local Civil Rights Movement. Although such gatherings were illegal through most of the 1960s, Dooky Chase’s was so popular; it would have caused a public uproar if local law enforcement had interrupted the meetings. Black voter registration campaign organizers, the NAACP, backdoor political meetings and countless others often found a home at Dooky Chase’s, and Leah cooked for them all.“

The National Food and Beverage Foundation (based in New Orleans) has mounted a novel campaign to monumentally honor Chef Chase’s memory in New Orleans.

Philip Dobard of National Food & Beverage Foundation dishes up the specifics for us.