Now a tempting preview of this Saturday’s scrumptious show.

It’s not, with profuse apologies, for dieters. If we’re successful we will hopefully leave you incredibly hungry and thirsty. In our case that’s probably a pretty good thing… As always, we greatly appreciate you being a part of our loyal listening audience. Truly couldn’t do it without you. 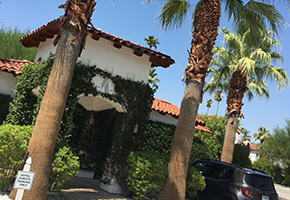 We’re live from Alcazar Palm Springs, a proud member of Palm Springs Preferred Small Hotels. They are the gracious hosts of the “SoCal Restaurant Show” for the weekend. (“Be authentic. Stay independent”)

Our always on-the -go Co-Host, Chef Andrew Gruel of The Slapfish Restaurant Group,” joins us with another installment of “Ask the Chef.” Chef Andrew responds to your questions. Chef Andrew discusses his fondness for fresh Hatch peppers from the Mesilla Valley in New Mexico. The short season is on right now.

Palm Springs resident Tara Lazar is the Founder of Foundation 10 Creative, a prominent, and growing, hospitality group in Palm Springs.

Over the past decade, Tara has created a small empire of iconic restaurants in the ever-growing travel destination of Palm Springs. Under the F10 family is the prominent brunch hotspot Cheeky’s, the handsomely appointed modern steakhouse Mr. Lyons and their classic cocktail hideaway Seymour’s, a lively and al fresco Italian eatery Birba, the sleek and serene hotel Alcazar, and perhaps their most active yet stealth operation – F10 Catering, the go-to service for top-tier brand and celebrity events in the desert area. Tara joins us.

Seasoned hospitality veteran Greg Rowen oversees the restaurants for Foundation 10 Creative as Managing Partner. In San Francisco he was previously General Manager of Traci des Jardins’ acclaimed Jardiniere and later the opening General Manager for Thomas Keller’s Bouchon Beverly Hills. We’ll chat with Greg about the revitalization and repositioning of Mr. Lyons Steakhouse. There is more on the plate than just another premium steakhouse.

For the 3rd time The Olympics is returning to Los Angeles in 2028. Did Los Angeles get a good deal for 2028, or just a deal? The person to now update us with authority is our Olympic Games expert, Richard B. Perelman, a Palm Springs resident. Mr. Perelman was the youngest Vice President of The Los Angeles Olympic Organizing Committee (LAOOC) from 1980 to 1984 overseeing Press Operations. Rich is the Editor & Publisher of The Sports Examiner Daily, providing independent reporting on the Olympic Games (on a complimentary subscription basis).

Chef Scooter Kanfer is the menu maker (with proprietor Tony Di Lembo) at Palm Springs’ The Tropicale Restaurant & Coral Seas Lounge (Comfort Food for a Modern World.) “Every night at Tropicale is a party.” We spirit Chef Scooter away from her busy kitchen for a chat.

“Alcazar Palm Springs (established in 2011 and a member of Palm Springs Preferred Small Hotels) is a serene and peaceful oasis right in the center of the cultural epicenter known as the uptown design district! This lush and relaxing 34- room boutique hotel is warm, modern & sleek, featuring Imported Italian linens, flat screen TV’s, fireplaces, poolside and private patios, salt water purified pool, cooling misters, Jacuzzi and a beautiful garden courtyard to lounge with your favorite book and glass of wine.” The hands-on, welcoming and hospitable General Manager is Robert Hunt. We’ll meet him.