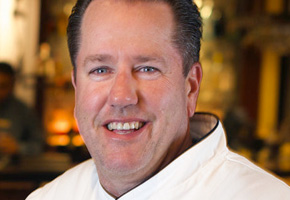 “La Fonda on the Plaza’s executive chef, Lane Warner, is a culinary juggler, keeping his kitchen, staff, menus, room service and banquets running smoothly and professionally, making it look effortless and fun. A graduate of the prestigious Culinary Institute of America, he trained under a series of renowned chefs and joined La Fonda in 1993 as executive sous chef. Six years later, he was promoted to executive chef and has earned several awards and accolades, including cooking dinner at the James Beard House in New York.”

“Chef Warner is an active member of the American Culinary Federation (ACF) and attained the ACF Certified Executive Chef level. In addition to winning numerous medals in ACF competitions, he was voted Chef of the Year by the New Mexico Restaurant Association and Chef of the Year by ACF Chefs of Santa Fe.”

“Under his tenure, La Fonda’s La Plazuela dining room has garnered rave reviews and is now earned the reputation as a sophisticated destination dining experience. Chef Warner’s seasonal menus celebrate the bounty of New Mexico and its rich culinary history. He is a master at taking old favorites and adding New World influences and showcasing authentic New Mexican cuisine.”

“Warner’s passion for food is equaled only by his love of the great outdoors, hunting and fishing. He spends endless hours training his Black Labrador for the upcoming waterfowl seasons. He is also an avid bow hunter for big game – elk, whitetail deer; you name it.”