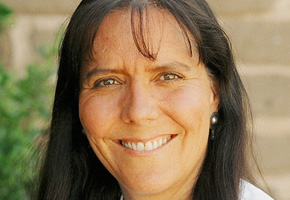 A Santa Fe, New Mexico based chef, author, Native foods historian and photographer Lois Ellen Frank was born in New York City and raised on Long Island, New York with her father’s side of the family. She is from the Kiowa Nation on her mother’s side and Sephardic on her father’s side. Her first career experiences were as a professional cook and organic gardener.

“Lois has spent over 25 years documenting foods and life ways of Native American tribes from the Southwest. This lengthy immersion in Native American communities culminated in her book, Foods of the Southwest Indian Nations, featuring traditional and contemporary recipes. It won the James Beard Award in the Americana category and was the first Native American book to win the award. She has worked with world-renowned chefs, scientists and academicians and collaborated with them to publish many culinary posters and cookbooks. She has worked with National and International advertising agencies as well as many editorial clients as a chef and a photographer.”

She continues to be involved in research on foods, including medicinal and spiritual plants, as well as working on projects focusing on the importance of traditional foods amongst Indigenous Peoples throughout the Americas, as sustenance and their uses ritually.  Dr. Frank’s Ph.D. thesis examines contemporary Southwestern Chefs using indigenous ingredients in their cooking and how this is representational of their own identities. She interacted with Native American & Non-Native chefs that combine traditional ingredients with contemporary techniques.

“Chef Frank started a Native American Catering and Food Company named Red Mesa Cuisine. Red Mesa cooks for private events, parties, weddings, corporate meetings and gallery openings as well as Native events and organizations all over the United States. Red Mesa combines Native American Culture and Cuisine by providing patrons with the history of the foods from the Southwest Indian Nations where she along with Chef Walter Whitewater (Dine) give patrons a unique fine-dining experience unlike anything anywhere in the state.”