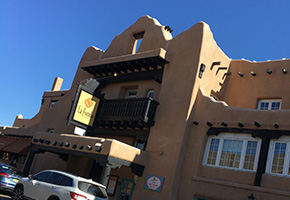 We’re on location at the landmark La Fonda On the Plaza in Santa Fe, New Mexico. Built in 1926 La Fonda, located just steps from Santa Fe’s historic Plaza, is one of the oldest hotels in the country and features local, museum quality art collected (and carefully maintained) from the opening by three forward-thinking ownership groups.

Now an enticing preview of Saturday’s scrumptious show. It’s not, with profuse apologies, for dieters. If we’re successful we will hopefully leave you incredibly hungry and thirsty. In our case that’s probably a pretty good thing… As always, we greatly appreciate you being a part of our loyal listening audience. Truly couldn’t do it without you.

Executive Chef Lane Warner has been the culinary face of La Fonda for an impressive 26 years. He has previously been recognized as Chef of the Year by the New Mexico Restaurant Association. At La Fonda Chef Lane oversees all culinary aspects of La Plazuela, La Fiesta Lounge and The Bell Tower Bar (as well as room service and a busy banquet operation.) We spirit Chef Lane out of his active kitchens for a chat.

Sheehan Winery is committed to making high-quality, all natural, boutique wines in New Mexico. The winery was founded in 2015 by Sean Sheehan, who learned the craft by serving for more than a decade as lead winemaker at some of New Mexico’s finest wineries. Sheehan’s wines are made exclusively from New Mexico-grown grapes. Sheehan Winery wines reflect the unique combination of sun, high altitude, dry climate and soil of the New Mexico climate. Sean deftly pulls the cork on Sheehan Winery for us.

In April of 2016 Chef Sllin Cruz was appointed as the executive chef of the award-winning, fine dining restaurant Geronimo in Santa Fe, New Mexico. After almost two years running the Geronimo kitchen as chef de cuisine and being awarded Open Table’s Top 100 Restaurants in America through his culinary talent, Cruz took over from acclaimed Chef Eric DiStefano, who sadly passed away in February 2016. Geronimo restaurant, located on historic Canyon Road, presents an exquisite ‘Global Eclectic with a French base’-inspired menu focusing on comfort delicacies from all over the world. Chef Cruz is our guest.

“Edible New Mexico is a bi-monthly magazine that promotes and celebrates the abundance of local foods in New Mexico. We value local, seasonal, authentic foods and culinary traditions. We celebrate family farmers who plant the seeds and work tirelessly to bring you the freshest local produce, the ranchers and poultry farmers committed to creating healthier and more sustainable methods of working with animals and the land; the food artisans who proudly create a creamy cheese and the wines to pair them with, and the local chefs who continually create to excite us with the unique flavors of this region. We at edible Santa Fe honor their dedication to using the highest quality, local seasonal foods, and we want to share their stories with you.” Publisher and Photo Editor Stephanie Cameron joins us.

“A Santa Fe, New Mexico based chef, author, Native foods historian and photographer, Lois Ellen Frank was born in New York City and raised on Long Island, New York with her father’s side of the family. She is from the Kiowa Nation on her mother’s side and Sephardic on her father’s side. Her first career experiences were as a professional cook and organic gardener. Lois has spent over 25 years documenting foods and life ways of Native American tribes from the Southwest.  This lengthy immersion in Native American communities culminated in her book, Foods of the Southwest Indian Nations, featuring traditional and contemporary recipes. It won the coveted James Beard Award in the Americana category and was the first Native American book to win the award.” Lois Ellen Frank, PhD is our guest.

Since 2012 Edward (Ed) T. Pulsifer has been La Fonda On the Plaza’s high-profile Director of Sales. He also enthusiastically functions as the unofficial resident historian of the Hotel. It’s one of the key leadership positions for the property. In 2016 the New Mexico Hospitality Association recognized Ed as the Hospitality Professional of the Year. Pulsifer joined La Fonda from Heritage Hotels and Resorts, where he oversaw sales and marketing for seven boutique hotels in the Southwest. We’ll meet 34-year Hospitality veteran, Ed Pulsifer.