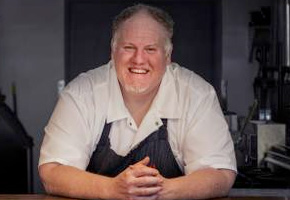 Inspired by the spirit of legendary bar woman Ada Coleman of the Savoy Hotel, Ada’s (Las Vegas) is driven by the idea that hospitality begins with offering every guest the best ingredients, preparation, and service possible. With Italian-inspired fresh pastas, artisanal American style pizza, seafood, meat and vegan selections at lunch, dinner and weekend brunch, Ada’s offers the best quality version of “something for everyone” in an elegant but casual setting amongst the Italianate streets of Las Vegas’ Tivoli Village.

Chef James original restaurant in Las Vegas is Esther’s Kitchen in the Downtown Arts District. He likes to describe it as “Seasonal Italian Soul Food.” Trees’ Great-aunt Esther (the namesake for the restaurant) was a tough, smart, no-nonsense type who cared about people and gave good advice. “She was a big support to my mom when I was growing up, and that was huge,” says Trees. “She was always there for us.”

Chef James is also one of the organizers of Vegas Unstripped, which is an energetic, locals’ food festival of impressive, off-the-Strip, chef-driven independent restaurants. It’s Saturday evening, May 2nd this year in Downtown Las Vegas.

We pull Chef James (also Esther’s Kitchen) away from his busy Ada’s kitchen Brunch line for a chat.