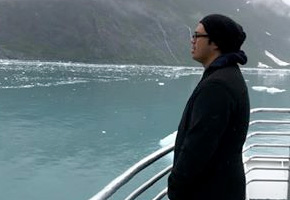 Tom Bergin’s located on S. Fairfax Avenue in Los Angeles (just south of Wilshire Blvd) is a landmarked institution. Also famous as the “House of Irish Coffee.” Opened in 1936 it holds one of the area’s longest continuously running liquor licenses. It even has its own parking lot – a true, but convenient, rarity in Los Angeles these days.

It’s had its ups and downs since the 2nd owner in its long history sold the establishment in 2011. Last year it was threatened with certain demolition but the new, astute property owners listened to the outpouring of community support and has reopened it under the culinary guidance of Chef Erik Punzalan (ex-Firefly.) We’ll meet him.

Tom Bergin’s is also known for the shamrocks (inscribed with names) covering most walls and the ceiling. The shamrocks, over the years, were awarded to loyal customers. Of course, many celebrities from Hollywood and professional sports are among the recipients of a coveted shamrock.