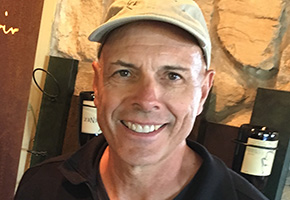 “Lenné Estate grows distinctive Pinot Noir vines in the Yamhill-Carlton AVA. Owner Steve Lutz began his wine career in Napa Valley, working cellars and managing tasting rooms for the Mondavis and Bill Harlan in the 1980s. He and his English wife Karen moved to Oregon in 1998, and began scouting vineyard sites after Karen inherited some money from her father Lenny, for whom the winery is named. Steve knew instantly when he had found the right site—poor soils and south-facing hillsides at 420-575 feet elevation are ideal for world-class Oregon Pinot Noir—and he planted his first vines in 2001. Six long years later, the vineyard finally achieved a normal fruit set, and Steve opened a tasting room on site.”

“Steve Lutz crafts the Lenné Estate wines with a minimalist’s restraint, seeking to showcase the vineyard’s unique terroir. Minimal oxidation, no centrifugal pumping, and only 11 months in a maximum of 35% new oak allow him to get the wines into the bottle as intact as possible.”

“Lenné produces Pinot Noir under three labels: Le Nez (representing the estate vineyard), Lenné cinq élus (a blend of the best barrel from each of the five clones), and Lenné Estate, which includes a barrel selection of the best wine from the estate, as well as clone-specific bottlings—Karen Pommard (named for Steve’s wife), Jill’s 115 (named for Karen’s mother), Eleanor’s 114 (named for Steve’s mother), and Kill Hill (a blend of 114 and 667 from the hillside with the highest vine mortality rate).

A pair of Estate Chardonnays (classic in the Oregon style) were added in 2017.

We continue our conversation with Proprietor/Winemaker Steve Lutz.