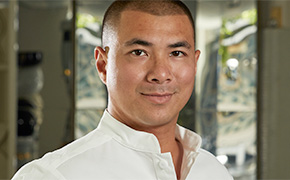 Chef Michael Hung began his culinary career in New York City, where he dropped out of culinary school to do extended stages at acclaimed restaurants Daniel and Aquavit. Michael then followed his heart to San Francisco in 2005 and joined Traci Des Jardins’s James Beard Award-winning team at Jardiniere. His career continued for nearly a decade in San Francisco, culminating with his appointment as Chef de Cuisine at Roland Passot’s Michelin-starred La Folie. In late-2013, Michael left San Francisco for Los Angeles to open Faith & Flower where he has returned as Executive Chef.

Community service in times of need is part of Chef Michael’s makeup. His current ambitious feeding program for those in need is under the banner of Donate to Feed L.A.’s Homeless and Underserved. Chef Michael takes a break from the kitchen and joins us with the critical details.

Faith & Flower hopes to reopen in the near future featuring a limited menu of take-out.