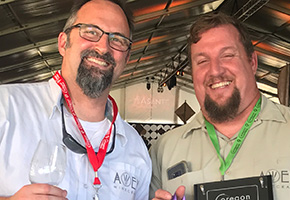 “Awen Winecraft officially started commercially in 2016 by winemakers Sean Hopkins and Tom Homewood. They had been producing small lots of hand-crafted hobby wine for over a decade, starting in California focusing primarily on red wines. After many years of honing their winemaking skills producing 4 to 16 Barrels per year, Sean and Tom decided it was time to try to make a business of their passion. Sean moved to Southern Oregon in the summer of 2011 and began experimenting with the Rogue and Applegate AVA grapes, again, exclusively focused on red wines in the region, which offers an abundance of red wine grapes that they previously hadn’t used. They moved on to white wines in 2013, and worked on creating both 100% varietals as well as blends.”

“Finally, after commuting up from the Bay Area roughly 30 times for winemaking duties, Tom packed up his family and made Southern Oregon his home in the summer of 2016 to help start Awen Winecraft.”

“Awen” is a celtic/druidic symbol describing the spark of creativity or divine inspiration or illumination.

“Working with Herb Quady, Brian Gruber, and Nichole Schulte at Barrel 42, we are bridging the gap from Hobbyist to professional, and are appreciative of their mentorship. We also appreciate all of the efforts of both the master growers that we work with, as well as the help and feedback we have received from other winemakers.”

Proprietors and Winemakers Sean Hopkins and Tom Homewood continue the fruit-forward conversation with us about Southern Oregon’s Awen Winecraft. Sean and Tom describe their noteworthy 2018 Albarino with an Applegate Valley AVA and their 2017 Sangiovese from the Rogue Valley.