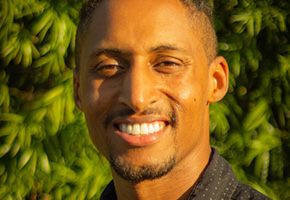 Establishing itself as a South L.A. cultural institution, Brad and Linda Johnson opened up the fine dining restaurant, Post & Beam in 2011 — its location adjacent to the Baldwin Hills Crenshaw Plaza Mall. Govind Armstrong served as head chef and partner, mentoring and eventually passing the culinary baton to John Cleveland. Last year, John & Roni Cleveland took over ownership of Post & Beam, keeping it a black-owned business. “With the changing of the guards, John will benefit from business consulting and access to senior leadership as well as mentorship in the kitchen from Govind, while Linda and I will focus on extending the brand through Post & Beam Hospitality LLC,” said Brad Johnson.

Chef John and Roni Cleveland are our guests. They will chat about becoming the 2nd proprietors of the well-established Post & Beam and the responsibility to the community that entails.