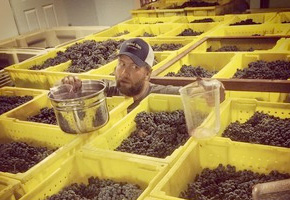 “Since 1995, Dos Cabezas WineWorks has been growing grapes and producing wines in Southern Arizona. The winery is supplied with distinctive, high-quality fruit from its two estate vineyards: Pronghorn Vineyard in Sonoita, and Cimarron Vineyard in the Kansas Settlement. Kelly & Todd Bostock are co-WineWorkers at Dos Cabezas WineWorks in Sonoita, Arizona – the winery they purchased in 2006 along with Todd’s parents, Paula & Frank Bostock. Dos Cabezas. WineWorks has been producing great Arizona wines from the vineyards they farm (the Cimarron Vineyard in Willcox & the Pronghorn Vineyard in Sonoita) since pioneer Al Buhl started operations in 1995.”

“The San Francisco Chronicle, citing “their commitment to making wine part of a homegrown Arizona gastronomy,” named Kelly & Todd among its 10 “Winemakers to Watch” in 2015 – at the time, the only non-California/Oregon winemakers to receive the honor in its 16 -year history. International wine critic, Stuart Pigott, has named their Meskeoli white blend among his 5 “Riesling Revelations”. In 2016, the Bostocks helped found the Arizona Vignerons Alliance to promote authentic, quality Arizona wines.”

“Winemakers Kelly & Todd Bostock work every vintage to make wines that tell the unique and delicious story of these vineyards and this place in southern Arizona.”

“Kelly & Todd live in Sonoita, Arizona with their two boys, just down the road from their Pronghorn vineyard.”

Todd Bostock joins us to pull the cork on Dos Cabezas WineWorks.