Co-host Chef Andrew Gruel of Slapfish Restaurant Group has two young children and also enjoys dining out at all levels of establishments. What to do? Chef Andrew shares his top picks for chef-driven restaurants that are also kid-friendly. Manga…

They range from incredible crab that you messily eat with your fingers to artisan pizza where the kids’ pizza making is an interactive process with the chef. Fun for all….

One of his secrets is to patronize an establishment that already has a level of background noise so the kids are not a possible distraction to the other diners. He also looks for speed in service. 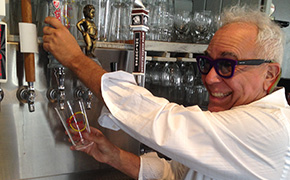 The absolute deliciousness of pizza.