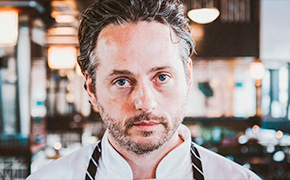 The Ace Hotel in Downtown Los Angeles arrived with a bang about a year ago. It’s the renovated former 1927 United Artists office building and adjacent landmark United Artists Theater (which was their magnificent West Coast flagship.) Their destination restaurant is L.A. Chapter along with a coffee bar and three cocktail bars including a very busy rooftop bar and deck with sweeping views of Downtown.

The Ace Hotel’s restored movie palace also hosted the premier of Columbia Pictures’ “The Interview,” a film very much in the international news. The stars and the director were all there.

It’s traditional American fare prepared with both classic and modern techniques using local and organic ingredients. The executive chef and co-owner is Ken Addington who also oversees the popular Five Leaves in Greenpoint Brooklyn. His business partner in both ventures is Jud Mongell. Many L.A. Chapter dishes are L.A. adaptations of signature Five Leaves items. Chef Ken’s motto is to have a fun place with good food.

How did a prominent Brooklyn chef with a very popular Greenpoint restaurant find his way to Downtown Los Angeles and a much larger food and beverage operation ? The beginnings were that some of the executives of The Ace Hotel group were satisfied patrons of Five Leaves. 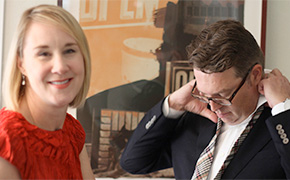 Opinionated cocktail authorities David Solmonson and Lesley Jacobs Solmonson are back with us with inspired advice on New Year’s Eve libations. They are the authors of The 12 Bottle Bar – A Dozen Bottles. Hundreds Of Cocktails. A New Way To Drink.

The Solmonsons are going to discuss how to get the hosts out from behind the bar on New Year’s Eve so they can enjoy their own party. We’re perhaps thinking of a spirited punch and champagne cocktail bar.