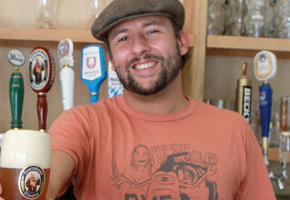 The new contemporary German restaurant in Bixby Knolls, Rasselbock, is one of the participating restaurants in DINE LBC. We’ll meet proprietor Bjoern Risse, talk about his appealing DINE LBC menu and find out what a “Rasselbock” is. It is not on the menu.

A must on the DINE LBC menu is Rasselbock’s Mini Potato Pancakes Appetizer. The potato pancakes are topped with house-made apple sauce and Mascarpone cheese. All menu items on the DINE LBC menu include a beer pairing suggestion. A dessert option worthy of major consideration is their house-prepared Apple Strudel. It’s adapted from Bjoern’s Grandmother’s treasured family recipe.

The patio of Rasselbock is dog-friendly. On Thursday “Dogs eat on the Haus.” It’s a special canine plate of all-natural Pork Bratwurst.